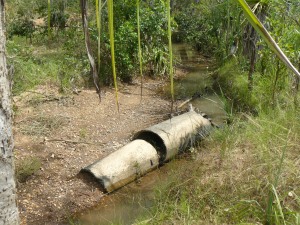 Many of the rivers in Australia are in varying states of degradation. Sensitive management of riparian zones is one of the highest priorities for natural resource management. Appropriate management can achieve numerous benefits including improved water quality, wind shelter…stabilisation and retention of soil, improved biodiversity and habitat for native wildlife, and improved capital value through aesthetics and so on.

Riparian zones are productive areas in the landscape due to the presence of water and more fertile ground.

Rehabilitation may encompass protection through the removal of threatening processes  such as : re-establishment or natural regeneration of trees, shrubs, grasses and sedges to stabilise soil; structural works to reduce erosion; weed ..control; replacement of non-living habitat such as snags; re-instatement of environmental flows; and control of exotic pests.

Riparian buffers are important to control sediment and nutrient inputs in waterways from erosion and run-off, particularly in areas that suffer high catchment disturbance.

The health of riparian vegetation has a big influence on the health of a waterway, as it plays a critical role in ensuring that ecological processes take place in a such a way that maintains a healthy riparian ecosystem and good water quality for all users.  It provides shade, shelter, food, nutrients and acts as a filter of sediments and pollutants.

Natural riparian vegetation incorporates a diversity of plants from submerged and emergent aquatic plants, grasses and groundcover, and shrubs and trees which vary along the length of a river depending on the topography, aspect, drainage and land use.

Riparian vegetation is also adapted to survive extreme conditions such as flooding and drought.

Soil type has a major influence on whether a site is likely to erode. Other factors include vegetation, water velocity, and turbulence but generally the degree of cohesiveness can determine vulnerability to erosion once protective vegetation is removed.

Rocky embankments are reasonably cohesive, erosion of surface sediments are limited. Clay soils are reasonably cohesive and tend to erode slowly, though the loose surface sediment is quickly lost. Non-cohesive sands, loams and dispersable clays are most prone to erosion and collapse. Re-vegetation and, structural works are just two of a huge range of available techniques.

The most appropriate technique depends on the site characteristics. Each site is different and any rehabilitation works should be tailored to the needs of the individual site or area.